Written for the Totem Poles attraction in Stanley Park. A tour guide seeks to guide us to an oasis of peace in the midst of a hectic world. Commissioned and presented by Summer Live.

Dog of your Understanding

Harvey has been waiting more than 140 dog years since he was told to ‘wait here’; his master is calling but why should he come running now? Set in Vancouver’s West End starting at Burrard and Nelson and ending in Nelson Park, this podplay remembers Dr. Peter Jepson-Young through the eyes of his guide dog, Harvey.

This podplay starts in the Atrium of the new Woodwards building on Hastings and Abbott. As you are guided through Gastown, the podplay unravels the intertwined history of two people.

Ashes on the Water

The story of two women divided by cultures and how the devastation of the Great Fire of 1886 brought them together – and gave voice to a song. This podplay travels from the North End of Main Street to the beach in Crab Park.

Two men–one from Vancouver, the other from New York–meet for a casual hook-up that evolves into a passionate, unconventional relationship that unfolds in two different cities over the course of eleven years. An evening stroll in starting near Richards and Robson and ending at Emery Barnes Park on Davie.

Five Meditations on the Future City

Set in the downtown eastside, this podplay begins at Metro Vancouver Pump Station on Carrall and Alexander and guides the listener on a walk through Crab Park and on a search for the edge of time.

Tetsuro sees an old park with new eyes. Set in the recently renovated Oppenheimer Park on Powell Street in the Downtown Eastside. Powell Street was the historical home of Vancouver’s Japanese community until World War II.

Commissioned and Presented by the Powell Street Festival | July 31 and August 1, 2010

Mr. Trumpet has been playing jazz at the Harlem Nocturne for a long time. All that is about to change. Set in the East End, historical home to Vancouver’s black community, Days of Old moves through a terrain of troubling encounters on a day of losing and finding.

A long, steady walk along the industrial waterfront by the Helijet and Seabus terminals, this podplay takes you into the underbelly of the new convention centre. A reminder that the world is at our feet.

PodPlays 125 is developed and produced with support from the City of Vancouver’s 125th Anniversary Grants Program and the participation of the Government of Canada.

Four commissioned podplays. Look Up, begins at the top of a spiral staircase and unravels the intertwined history of two people. Five Meditations on the Future City is a search for the edge of time, and Portside Walk reminds us that the world is at our feet. In the final play, G… Cordova, an elderly woman struggles to orient herself within the increasingly strange landscape of the city.

Developed with the generous support of The Vancouver Art Gallery, Westbank Developments, and Easy Park. 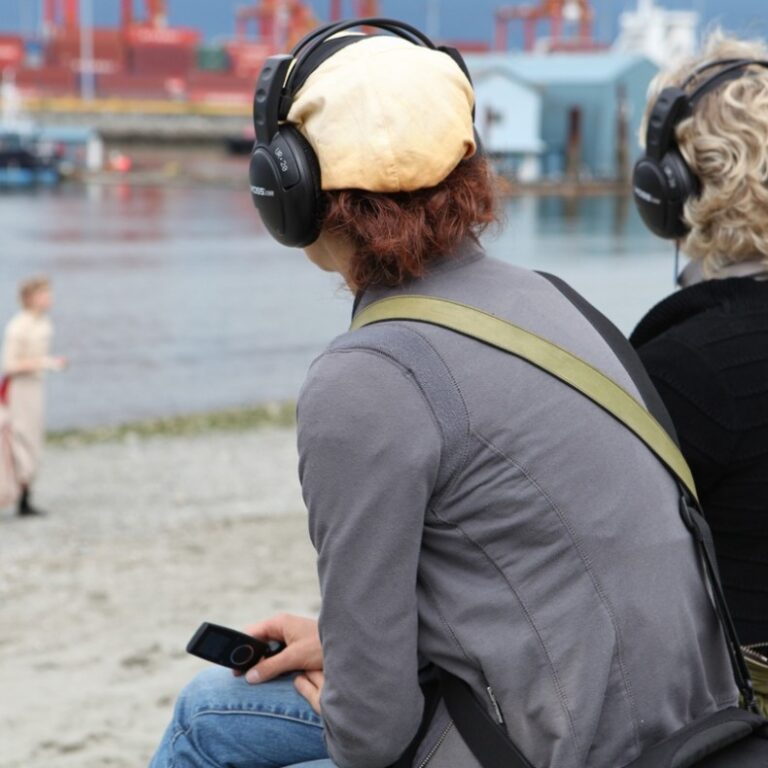