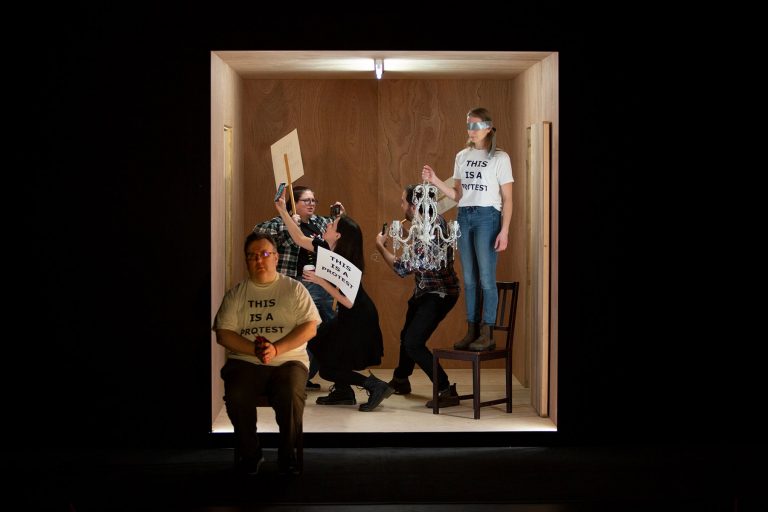 Created by and co-produced with Back to Back Theatre. Presented with PuSh International Performing Arts Festival. Supported by the Canada Council for the Arts, The Hamber Foundation, the Broad Cove Fund at Vancity Community Foundation and Roundhouse Community Arts & Recreation Centre. Image by Jeff Busby. Back to Back Theatre is supported by Australia Council for the Arts, Creative Victoria, City of Greater Geelong and Creative Partnerships Australia and acknowledges the support of the Department of Education & Training, Victoria, through the Strategic Partnerships Program. Back to Back Theatre is part funded by the Australian Government Department of Social Services.

How We Got Here

In 2008, three days after receiving a substantial investment from the province to begin co-writing what became Peter Panties, our first show with our colleague Niall McNeil, whose life includes Down syndrome, I went to see Back to Back’s Small Metal Objects at the PuSh Festival. In addition to being one of the best shows I’ve seen anywhere in the last decade, this original mixed-ability work transformed my idea of what might be possible in our work with Niall. The show was smart, driven by artists with disabilities, complex and – most of all – did not refer to its artists’ disabilities at all. They were simply artists, doing what any artists do – performing a show they had co-created. Ever since, Back to Back has been an inspiration and, more recently, a support for the mixed-ability work (King Arthur’s Night) we have been creating and touring on a continually growing scale. Then, last fall, Back to Back contacted us to see if we would be interested in co-producing THE DEMOCRATIC SET with them as part of the 2020 PuSh Festival. We enthusiastically agreed, seeing it as the ideal opportunity to continue, and expand, the work we’ve been doing with our mixed-ability ensemble. And here we are.  –Marcus Youssef