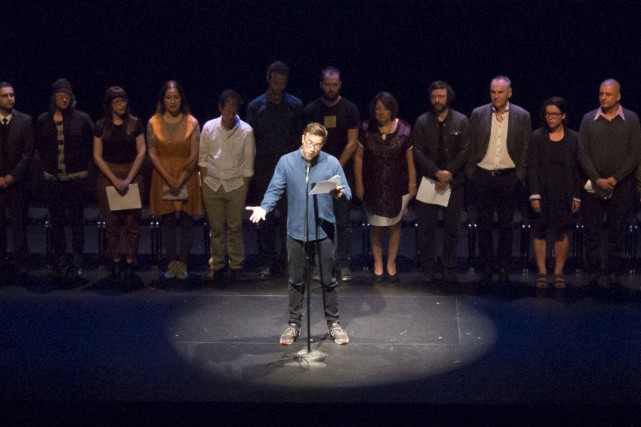 On June 28, 2017, Marcus Youssef took part in 26 lettres: An ABC of words that are losing their meaning in Ottawa at the National Arts Centre. Marcus was among an incredible group of thinkers and writers, including Daniel MacIvor, Sook-Yin Lee, Paul Wells, Monia Mazigh, Mary Simon, and Brendan Healy. From the Canada Scene website:

“At the instigation of Quebec author Olivier Choinière, 26 playwrights, poets, writers, journalists, comedians, politicians from across the country explore 26 words connected to current events in 2017, words that are overused or losing their meaning. These words are rehabilitated through letters written to real people – either people the writers know personally or public figures. The writers read their letters aloud from the stage, and each in his or her own way probes our relationship with a world where vocabulary is steadily dwindling and words are increasingly mediatized, distorted, or stripped of their meaning.”

Marcus was assigned the letter S. For Security. This is what he wrote:

I write to you as the CEO of Canada’s leading manufacturer of military drones. As you know, your company, along with General Atomics, Northrop Grumman and Boeing accounts for most of the $9 billion global market for Unmanned Aerial Vehicles, which you have given names like the Shadow V-2, and the MQ-9 Reaper.

Security is your raison d’etre: to prevent terrorist attacks on people like me, ordinary Canadians with jobs and families and hobbies like gardening and trying to keep a lid on our alcohol consumption; to protect us from a single act of pre-meditated violence, say a white van driven at high speeds onto a sidewalk; or a small button on the outside of a backpack, quietly pressed between a thumb and forefinger.

It can happen anywhere. In France and Britain. In concert halls and theatres. It could happen right now, as I stand onstage in front of an audience at Canada’s National Arts Centre.

Despite my name and appearance, I am not one of the people you should worry about. My family is from Egypt, and Christian, so they’re on our side. I was born in Canada. I have a NEXUS card, and security pre-clearance at all Canadian ports of entry.

Despite this, Ellen, I regret to tell you that your company’s work does not make me feel more secure.

I began writing this letter in Vancouver, on the morning of Tuesday May 23, 2017. It was raining, and about twelve hours after twenty-two people, mostly young girls, were murdered by a man carrying backpack who pressed a small button in a Manchester stadium at an Ariana Grande concert.

Elidh Mcleod, 15. Chloe Rutherford, 17. Sorrell Leczkowski, 14. Among nineteen others. I read about them in the media. I scrolled through their Instagram accounts and Facebook pages. They remind me of my teenagers, with their bad makeup, and braces. Their zits and volunteerism and too-revealing outfits. One played the bag-pipes.

Do you know, Ellen, how many children have been killed worldwide by your company’s drones over the last ten years? Looking at pictures of these girls from Manchester made me wonder.

400. 400 children. Or two Manchesters a year, every year, for a decade, in countries like Pakistan, Yemen and Somalia. I cannot find any photographs of these children. None of them had access to Instagram or Facebook, as best as I can tell.

This is why I am writing you.

In order to feel truly secure, I feel like I need to know as much about these Waziri, Yemeni and Somali children as I now know about the innocent girls murdered in Manchester. The shape of their faces, where they went to school, what they dreamed their lives might bring.

I understand you might believe the murder of these 400 children may have been necessary. That the missiles fired by your Shadow V-2’s which tore their small bodies to pieces, may have prevented our deaths. My death. Frankly, I doubt this is the case, but I am willing to admit that it is possible.

But I believe an honest definition of the word security demands that we grieve every child whose life is sacrificed in the name of our protection. Every single one. Grieved as fully and eloquently as we rightly mourn the heartbreaking loss of 22 young girls from Manchester.

In the end, all I could find of these 400 other children was their names.

I am happy to tell you that telling you their names – even just this – begins to make me feel a little more secure.